Yakima - A wretched hive of scum and villiany!

Autumn in the Northern Hemisphere is the crescendo of seasons in the beer world. Fall is the time when the hops mature and are harvested, which means it is the only time of the year beer is made with fresh/wet hops, unless, of course, you happen to be in the Southern Hemisphere where this happens in the spring.

Fresh hops or wet hops means they are used fresh off the vine without drying, kilning, or any other processing. Wet hops will quickly, within a few days, begin to decompose to the point they are no longer usable. Freezing wet hops for later would result in a soupy disgusting mess. When the water in the hop freezes it punctures the cell walls, the same as what happens to lettuce when it is frozen. Instead, you must synchronize your hop source, the brew day, and your post-brew hop additions, with as much attention to timing as Janet Jackson's choreographed accidental wardrobe malfunction.

Every year at the beginning of October is one of the Northwests most prestegious and specialized beer festivals, Yakima's own Fresh Hop Ale Festival. A festival devoted to beer made with fresh hops. Don't even think about sneaking in an Octoberfest/Marzen lager or even an IPA made with hops from the previous year's crop. 2013 will be the 11th year of the festival and it is all about the fresh.

Fresh hop ale from such breweries as Lagunitas, Widmer, New Belgium, Ninkasi, and Sierra Nevada will compete for the prestige to be the freshest and hoppiest . In addition to the commercial craft beer competition, there is a BJCP ranked homebrew competition, which is where my participation comes in. The homebrew competition is very challenging. Most of the homebrewers, myself included (Thanks CLS Farms! & Hopunion), have access to the best fresh commercial hops available.

This year's IPA began with a trip to visit my friends at CLS farms in Moxee Washington. Tim Gamache was kind enough to take time out of his busy schedule to load me up with some amazing Centennials. I have never smelled Centennials so fragrant and fruity. A second trip for a load of El Dorados for a dry hop addition happened two weeks later. This years IPA hit its numbers with temperatures and gravity, but I can only shrug my shoulders thinking of how much wort and beer those hops soak up. I began with 13 gallons after the boil, and ended with about 9 gallons of finished beer in the keg. Something to definitely keep in mind when planning how much beer you want to end up with.
A technique I learned at the National Homebrew Conference in Seattle 2012 is to fill up the mash tun with fresh hops, pump the hot wort from the kettle into the mash tun, and circulate by pumping hot wort from the bottom and draining it on top of the hops for about 20 minutes. 8 pounds of wet hops is about all I could fit into the mash tun. After primary fermentation, another 2 pounds of fresh hops went in the fermenter as it took its slow journey from 67-ish down to about 38 (almost 8 days) as a dry hop addition.

The rule of thumb I have heard from the hop growers is an 8 to 1 ration of wet to dry, I have also heard a 5 to 1 ratio, but, when it comes to hops, it's better to have too much than not enough; you also have to consider the amount of dehydration that has taken place from the time of harvest to the time you actually used them. I was shooting for, what I heard the Ninkasi guys and Lagunitas say, 1.5 to 2 pounds per barrel. I am not making a barrel, I am shooting for a little less than half a barrel, so, to make things easy, I want 1 pound hops for my measly 13 gallons of wort. 1 X 8 = 8 pounds of wet hops. A 5 to 7 gallon
batch would be more like 4 pounds. 4 pounds for 5 gallons in the fermenter will get you in the ballpark for the mash tun re-circulation technique. Dry hopping is recommended if you are entering into a competition where the judges are tasting 20 different fresh hop IPAs back to back and everyone's taste buds and sinuses are completely shot, so picking up a ribbon at the Yakima Fresh Hop Ale festival calls for extreme hopping measures. 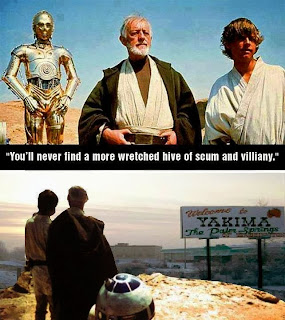