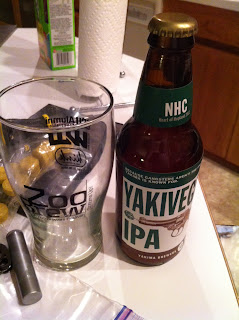 National Homebrew Conference 2012 and the Yakima Washington brew club made a beer for NHC 2012, which was in Seattle. Everyone in Eastern Washington was excited for NHC to be in our backyard. While at NHC I commented to Chad Robers, Head Brewer at Snipes Mountain Brewery, how much I liked the Yakima Brew Club's bottles of IPA. I was refering to the labels, because I had not had the oportunity to try the beer. Months and months later I was at Snipes Brewery and Chad had something for me. It was a bottle of the Yakivegas IPA. I was truly amazed that Chad had remembered and actually took the time to set a bottle aside. He said not to drink it because the beer was presumably bad, since so much time had passed since bottling.

Tonight I cracked open my sole bottle of Yakivegas IPA. The carbonation is spot on and color is golden while white stripes of Belgian lace cling to the sides of the glass. There was very little aroma, maybe subtle mint and alcohol with an underlying dankness that is very subtle. The taste is very hop forward with a strikingly clean bitter that lingers and fades into an alley dumpster behind a floral shop after mothers day, but in a good way. The front of the mouth is all malt meets carbonation. The beer is well attenuated and well made. Not to mention, aged well. Considering my bottle is almost 1 year old, I would say the Yakivegas IPA is fantastic, and I wish I had another...
Posted by Lemy at 10:30 PM