The casual fans did not like it when Dylan went electric. They preferred him more one dimensional and without expressing himself through experimentation in sound. I am a casual fan of Dylan, but really love what he was doing during the electric years. The album Infidels (only $5.00 on Amazon) is amazing to me. 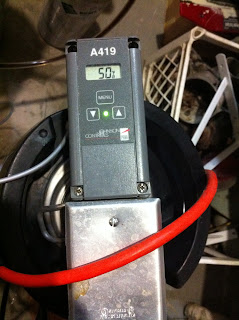 I am always trying to find a way to make the brew day easier, quicker, and less importantly cheaper.  I'm also a techie nerd with a desire to experiment.  Electricity is cheaper than propane and in a lot of ways safer; however, probably not in my case. The idea here is to electrify my hot liquor tank. Basically, taking my keggle, punching a 1" hole in the side wall, and mounting a water heater element inside of it. After discussing the idea of an electric hot liquor tank with my good friend and excellent brewer, James, I had a vision. A timer on the wall that would power on the Johnson Temperature Controller around 3:00am and heat the tank full of water to 170 degrees by the beginning of my typical brew day, 5:00 or 6:00am. I get out of bed and start the without waiting and without blowing $5.00 of propane. I am still doing my boil on propane, but this is a pretty good start.

It sounds simple enough, and there is a lot of information about going electric. People focus on how much time it takes and how many amps, watts, and volts to the point that a person really need to have an electrical background. I came to the realization that time was not going to be a factor for me, since the ultimate goal is to put the whole thing on a timer and start heating the water while I was sleeping. I can still put my keggle on a burner if I need speed, and now, using both heat sources, propane burner and an electric element , I would imagine I can heat a lot of water really quickly; win win... 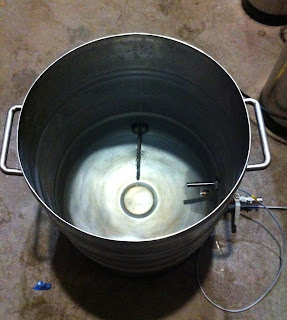 So then it comes down to everyone telling everyone on homebrewtalk and other sources to use the 4500 watt 240V Ultra low density elements, which is probably what one would need if they were going electrify their boil kettle. going the 240 Volt route has an expense attached to it. 10 gauge wire is not cheap and few people have a spare 240Volt breaker not being used. For me it was too much of an investment both in time, money, and lack of electrician skills, so I  opted for a 120Volt 1500 Watt high density element. I believe it's the smallest they make. 1500 watt can be plugged into any standard household plug, as long is little else is on the same circuit. It can also be plugged into a typical Johnson or Ranco temp controller, neither of which are able to handle 4500 watts at 240V . My electric keggle can be taken over to a friends house without any hassle or special considerations. Granted, I cannot, or should not try to boil wort with it, but in roughly 3 hours I can take 12 gallons of 50 degree F water up to 170 degrees. Of course there are 2000 watt elements, but then you need a 20 amp circuit and special plugs, not to mention at least 12 gauge wire. 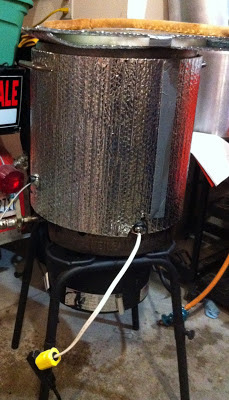 The other big benefit of this rig is the temperature controller. I don't know how many times I have overshot or undershot my strike water using the propane. Now I can set a temperature and it will be held at that temperature for as long as I want, only fluctuating plus or minus a degree or two.

These guys, The electric Brewery, have really broken things down, such as mounting the element, making the holes, wiring, and controlling.

I have two important tips:

1) Greenlee knockout punch, they are worth their weight in gold and, in my opinion, the only way to make a hole in stainless steel. I found a used set off Craigslist for $60.00, but you can rent them from a local tool rental place, just do not say you will be using it on stainless steel, because they will not rent to you. Stainless is tough stuff and will ruin the punches over time.

2) The bottom of keggles (kegs) are curved. Make sure you mount the element high enough to get the 1" nut on the threads. The elements do not have very many threads, so there is not much to work with. Once you punch the hole there is no do-over, you are stuck with it. Mine is actually too low, but, with the help of a hammer, I did make it work.

I'm trying to think of a clever way to tie electric brewing back to Bob Dylan, but It's all over now, Baby Blue.  Maybe it has to do with breaking one's own mold or the discovery of potential, whatever it is, I feel a change comin' on.
Posted by Lemy at 8:41 PM