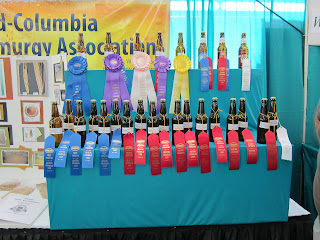 The main reason for a home brewer to enter a homebrew competition should be for the Beer Score Sheet. All BJCP sanctioned competitions use the official Beer Score Sheet. It is a breakdown of how the judge interpretted your beer. You will receive at least two score sheets from every entry.

When sharing beer with friends and family, a person does not get the impartial, un-biased, and educated opinion of a BJCP Certified Judge. Family and friends usually have the best of intentions, but good intentions do not make for a better brewer.

There are great Judges, like Sean Drew of the Impaling Alers brew club in Seattle Washington who judged my Traditional Bock last winter for a Washington State (I have never placed in my own state...) competition and was able to detect a 'hint of smoke', which I could not detect even though I did put in a small amount of smoked malt in as I thought it would add complexity to the aroma. Sean pointed out some of my flaws that I sort of knew were there, but was not actually sure of. Flaws like Diacetyl, I did not fully understand lager fermentation and that you really need to let the yeast run its course and do what it is supposed to do. Sean also pointed out that I probably did not have a large enough yeast starter, which stressed the yeast and gave a hot alcohol mouthfeel. Sean was spot on and because of his feedback I have done some reading, changed my process,  and have had my next lager, Stanley Steamer, take 1st in Pennsylvania, and third in  Ann Arbor Michigan. On the flip side, there are score sheets that come back with very little insight. I have found a few Judges tend to be hopheads, which is pretty typical for most American craft beer drinkers, there is a wide world of beer styles out there and so many people limit themselves to one style of extreme hops, you know which one I'm talking about.

Of course winning medals and ribbons is really cool and makes us feel accomplished, but the Score Sheet is usually full of constructive criticism that can pinpoint flaws we may be overlooking.  If you are a homebrewer and have friends say what terrific beer you make, enter a homebrew competition and have your beercentric ego put in check.
Posted by Lemy at 9:34 AM