Fear and Loathing in a fermentation chamber 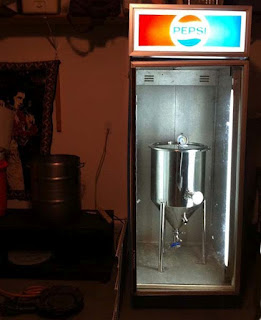 It all began May 15 2012. I was in Gresham Oregon for a work training class seminar sort of thing. Coincidentally, near the class, is the home of Stout Tanks and Kettles. A stainless steel conical fermenter is what I need to take my brewing the next step. I run out of beer too quickly and have a hard time managing the bottling for competitions, sharing growlers with friends, and having beer on hand at home. brewing 10 gallons instead of 5 means the same amount of effort, but twice the volume. I purchased a 14.5 gallon stainless steel conical fermenter with a thermo-well and racking arm.


I get the fermenter home and realize I have no way to control the temperature. If I have learned nothing else from all of the processes and methodology of beer brewing beer, I have learned the lack of temperature control during fermentation will kill your beer. My garage gets upwards of 90 degrees in the heat of summer and can get below 40 in the winter.

There are several methods for a homebrewer to control the temperature:

Professional breweries use double walled fermenters (jacketed) and pump glycol through to maintain the temperature. the glycol is cooled using a glycol chiller, which is a minimum $1,000.00, for a used one.


I chose the fermentation chamber route. I scoured craigslist for an upright freezer. The fermenter is 18" x 34", and I need access both from the top and from the bottom, which disqualifies a chest freezer. I figured an upright freezer is the way to go, since refrigerators are not tall enough and not deep enough to accommodate those dimensions.


My first purchase was a 1970's Maytag freezer. It was both deep and tall enough for my fermenter, but not by much. It was located in a rural trailer park, which is actually a compliment. There were people living in truck-less campers and decrepit travel trailers. I actually did see a tent or two amongst the weeds and sparse groupings of 70's and 80's era trailers and campers. The guy I purchased it from looked about my age. He was nice enough, but haggard and dirty. I believe he earns a living from selling old appliances on Craigslist. I give him $50.00 and he helps me load it. After I got the freezer home I was going to clean it and began removing the shelves. Two of the shelves are not removable. They actually have coils running through them, and they are connected to the main cooling system. This shows my ignorance of residential appliances. I had no idea... What now, I can't go back there and ask that poor guy for my money back. I just don't have the heart. I ended up trading for a few free lawn mowings, plus I didn't have to haul it anywhere. It all worked out, and I learned something.


I began my search again, which included a trip to Prosser Wa to see another 1970's era freezer that was advertised as 'huge', which it was not, at all. A Russian food store was selling a Pepsi merchandiser with two doors. Both doors were 16" each, which is not large enough to accommodate the fermenter. I was wondering how hard it would be to remove the top and drop it in that way, but finally decided against it. I stopped in at a used appliance place to see what they had, and what they would recommend. I learned that almost all residential coolers freezers are just too small, and that I would need to look into commercial appliances. 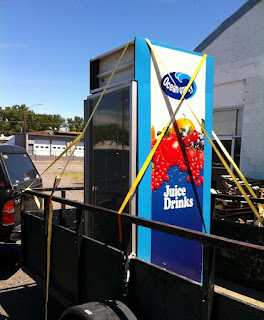 My final find was, again, from Craigslist, a 1970's Pepsi merchandiser. It was dirty, but it worked. The lights came on, the compressor came on, and the circulation fan came on. This was it! the size is perfect and it's even vintage. Two problems, because it is 30-40 years old it is really heavy, and it doesn't cool. My friend Matt helped me get it home, only to find out that it does not perform its intended purpose, which is to cool things, like fermenting wort. It was actually warmer in the cooler than the ambient temperature of my garage; I am very disappoint, yes disappoint, so much so that I cannot even include the 'ed'. Give up, I did not! I found a commercial appliance company, Total Service, in a neighboring city and dropped it off for a week (much easier said than done, did I mention this thing is really really heavy?).

Today 6/20/12, my Pepsi merchandiser is ready, and Matt is, once again, willing to help move this monster. $172.19 to fix a coil leak, flush the system, installed a drier filter, and charged with new coolant. 2 hours later the inside of the cooler is chilled down to 40 degrees

Grand total: $372.19 and a whole bunch of hassle. If the National Homebrewers Conference was not this weekend, I would be brewing. If you are thinking about an upgrade to a conical fermenter, make sure you do your homework and save yourself some hassle.