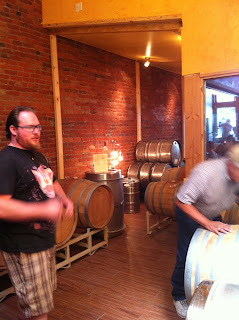 The family took a trip to Dayton Washington to attend the grand opening celebration of Mace Mead Works. I will not begin to claim I know anything about Mead. My only Mead example before today was a 'too sweet' homebrew I thought was ok; however, not at all memorable. The three examples I sampled today really surprised me in that I was able to pick up fruit flavors, especially in the dry offering all from just yeast and honey. Reggie Mace, Owner and Mead designer, offered a sample of mead pulled from an oak barrel, which added a bit more complexity and depth. I would put Mace Mead Works mead up against any of the award wining white wines produced in this area. 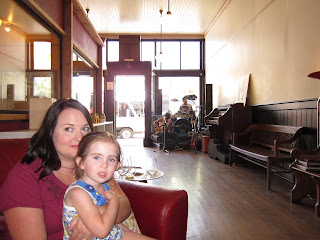 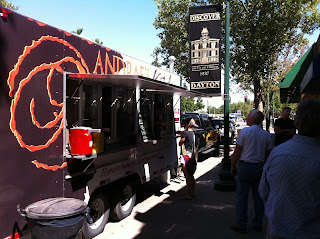 To accompany the grand opening was Andrae's Kitchen truck, which is competing in the Food Network's "The Great Food Truck Race". I'm not really even sure what that means, but the food was great. I had fish tacos with pickled Daikon and carrots, and they were very good. My wife Had the Bratwurst, which was a little dry, but they guy makes his own sauerkraut and that makes the whole thing. There is no comparison between store bought and made from scratch sauerkraut.

Mace Mead Works had me when I walked through the door as The Clash were playing on the house stereo, and later we were entertained by Rubberneck, who turns out to be a new band put together by Dylan, singer and guitarist of the Slooches. The Slooches are the best band to come out of Walla Walla Washington since the Holy Ghost People. Rubberneck are doing a two piece punkabilly blues sort of hill music for derelicts, which is a good time and fun to hear the sounds that come out of a drum kit manufactured by Tupperware. Not only is the Mead fantastic, the place is actually very cool. I will definitely be back. 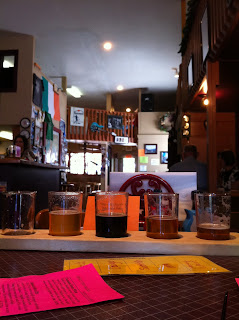 Following the Mead tasting we were able to do something I have wanted to do for a while now and that is to visit Skye Book and Brew, which is a book store that makes beer or is it a brewery that sells books? Whatever they are Skye Book and Brew offers a very relaxed atmosphere and friendly staff. They have a Scottish Ale that features peated malt. I have not tried very many, but this is the first peat malt beer I have actually liked. Their Oatmeal Stout was probably my favorite out of the flight. There was an unusual malt flavor in the middle that was quite pleasing, and very little harsh black malt bitterness. We thought the pale ale was under carbonated.

We finished off the day with dessert at one of the family's favorite restaurants, My wife and I were actually married there by the Mayor of Pasco, The Weinhard Cafe.

All in all it was a fantastic day in Dayton! I would highly recommend anyone to spend a day eating and drinking Dayton Washington.